Monday evening, about 30 people met at the Arts Alliance on Howe Street to discuss the future of VanDusen's Education Centre, aka the Forest Centre, MacMillan-Bloedel Place and 'A Walk in the Forest.'

Comments from the panelists and the discussion after followed two streams:

1) that if VanDusen loses the Forest Centre space it will also lose a large number of its volunteers because it will not be able to run its education programs, train its volunteers, and maintain the city's Cherry Blossom Festival, etc. There is simply no space in the other buildings where these programs can be administered.

2) the principal objective must be to save and stabilize the building, in the short term to allow VanDusen's volunteer programs to continue, in the longer term to find new partners who will, perhaps, create a new use for the building more in keeping with its unique design and historic role as an environmental centre.

Comments recorded and synthesized from the panelists' presentations (apologies for the syntax):

Michael Kluckner, artist and author of historical books, gave a Powerpoint presentation of the history of the site, excerpted below: 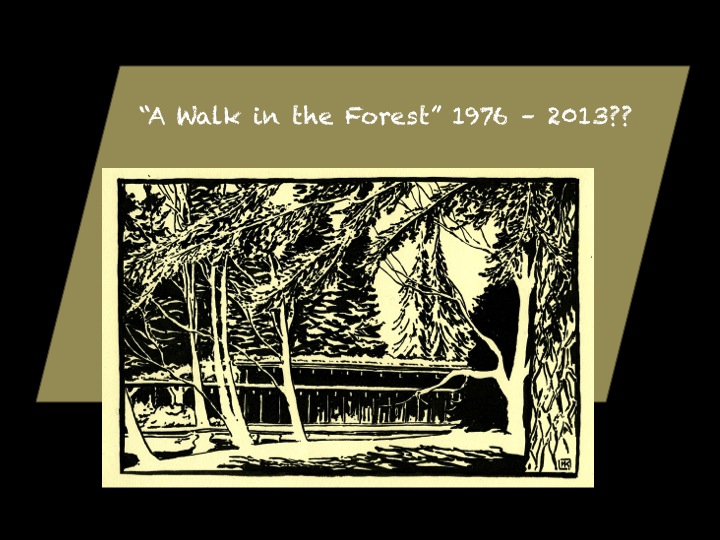 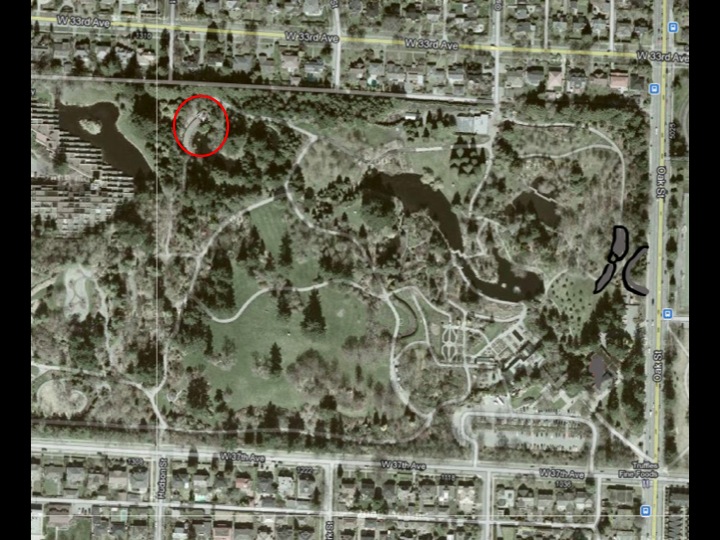 ... located in the nw corner of VanDusen Garden... 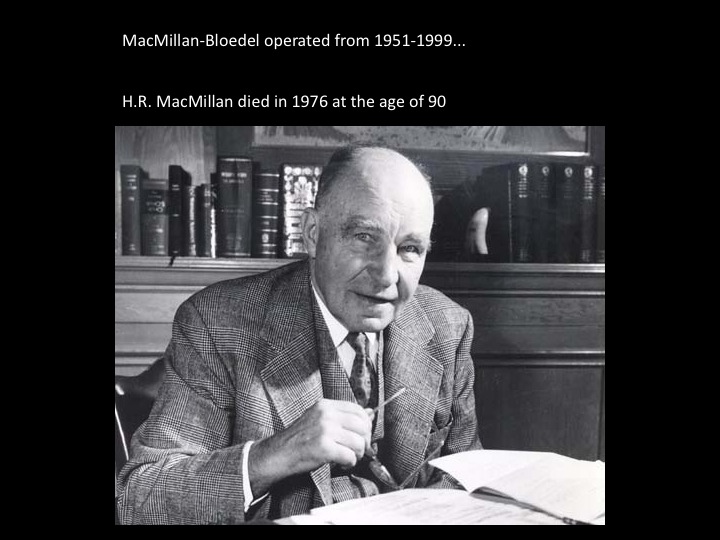 The building is part of a tsunami of philanthropy from Harvey Reginald MacMillan and his partner Prentice Bloedel, principals of the largest forests company in what was the largest industry in BC... 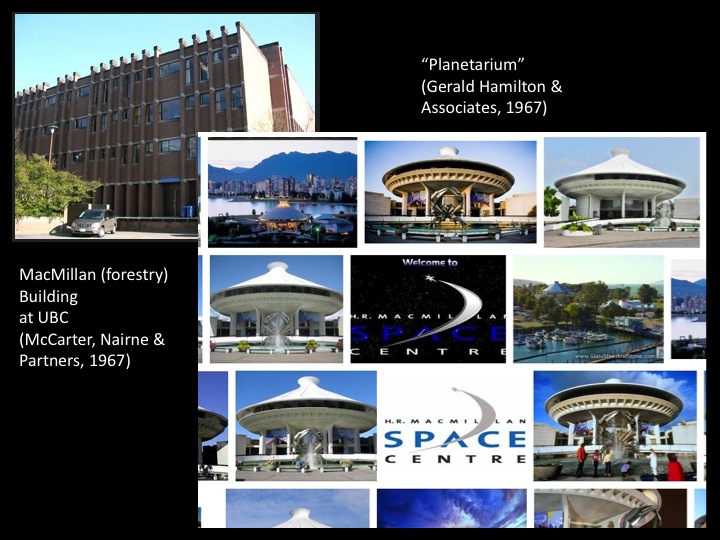 Two of MacMillan's bequests to the city in the 1960s; another was a gift of $2 million (huge at the time) to the UBC Library, allowing it to amass a significant set of rare books and manuscripts for its Special Collections division... 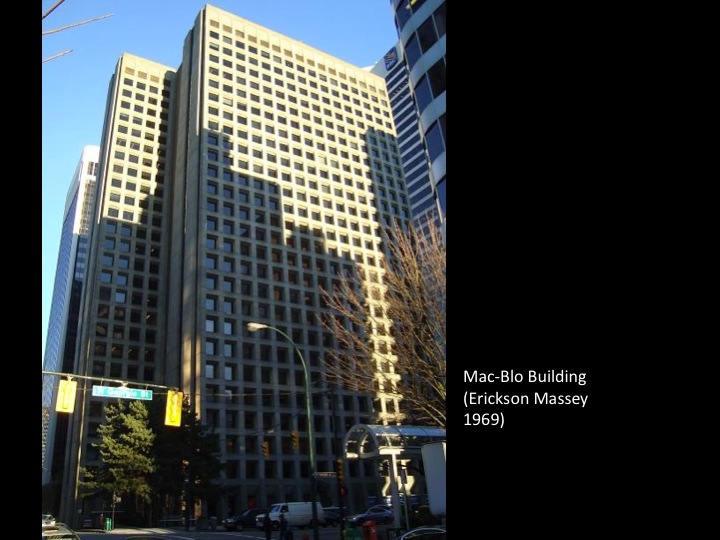 The MacMillan-Bloedel Building at Georgia and Thurlow, built in 1969, the same year as the second Bentall Tower and an early part of the revitalization of Vancouver's downtown office centre... 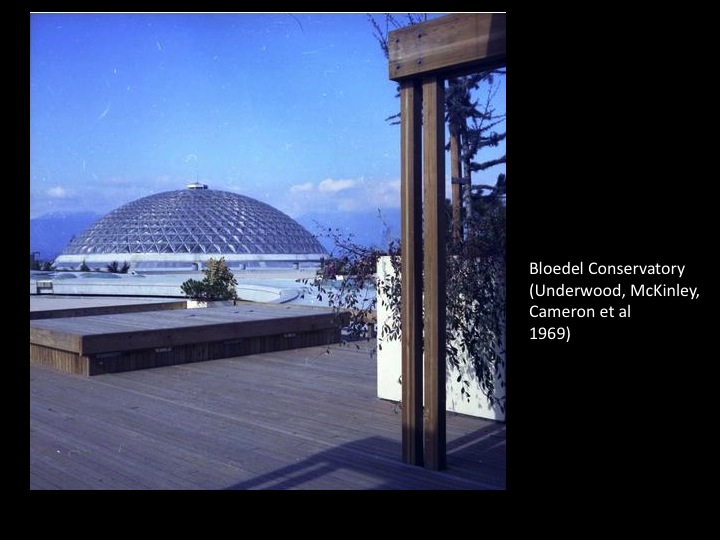 Seattle-area resident Prentice Bloedel's major bequest to the city narrowly escaped demolition a few years ago, and was saved by citizen action; it is now administered by the VanDusen Botanical Garden Association instead of by the Park Board, who wanted rid of it ... 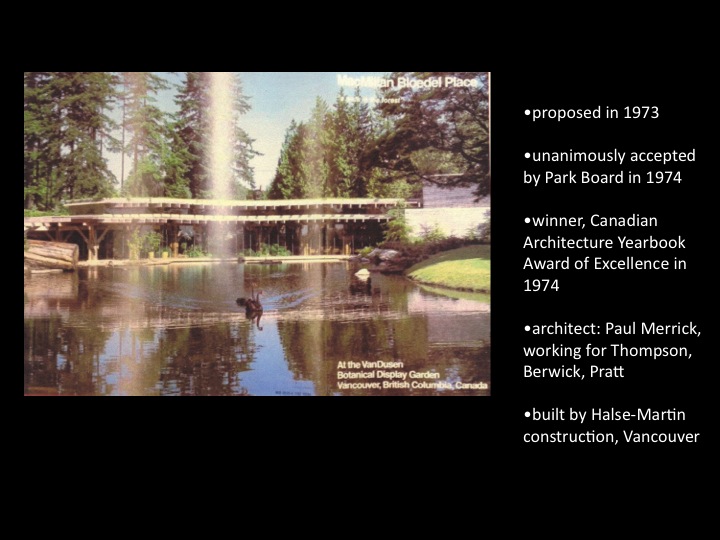 ... details of the building 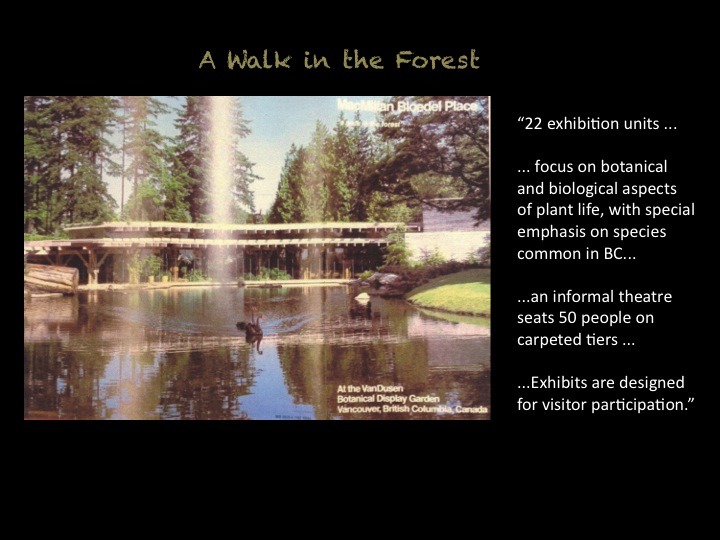 ... and its state-of-the-art displays 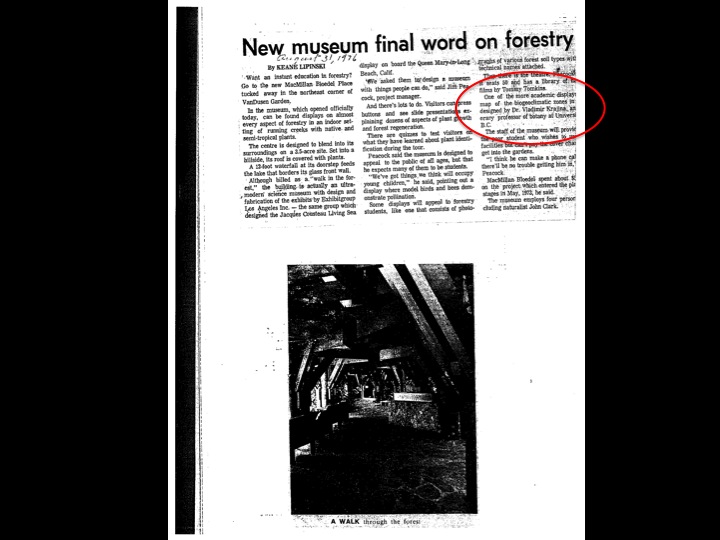 A Province newspaper article from 1976. The circled paragraph highlights the contribution of Dr. Vladimir Krajina, who developed the province's system of bio-geoclimatic zones that is admired around the world. Krajina recently died.... his contribution is significant for showing that "A Walk in the Forest" presented real science, real ecology, and wasn't just a piece of puff touting MacMillan-Bloedel's forest practices.... 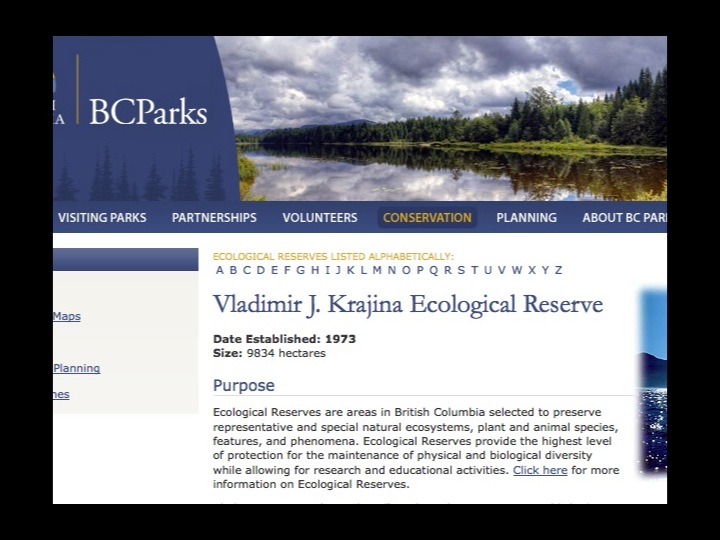 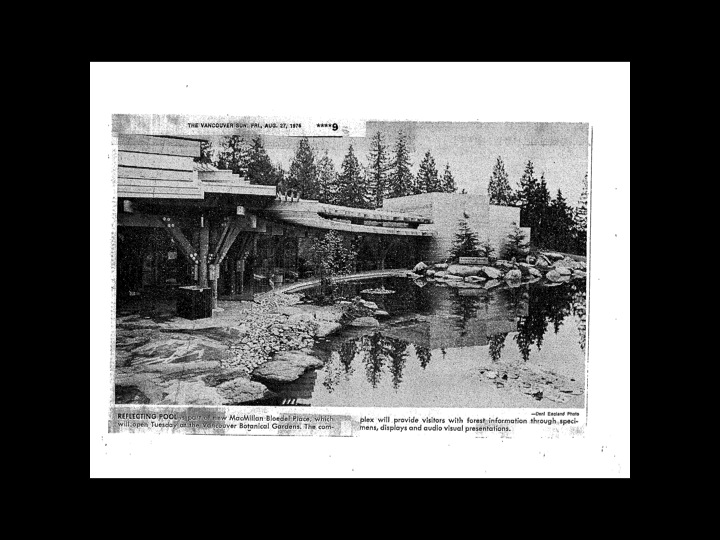 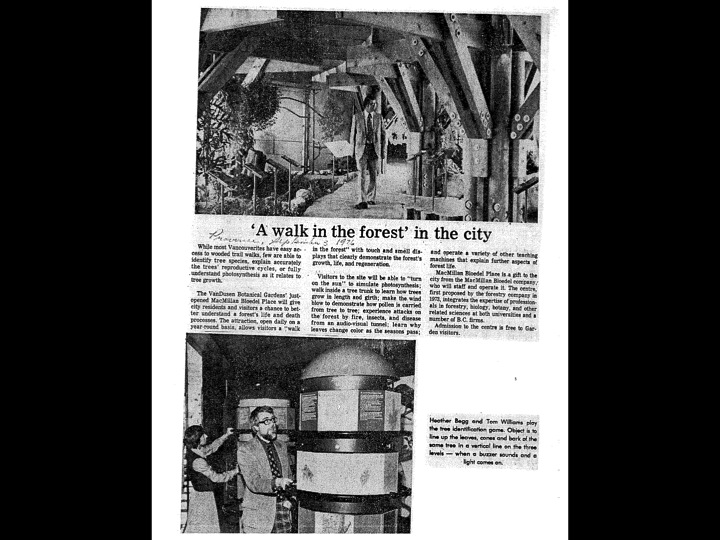 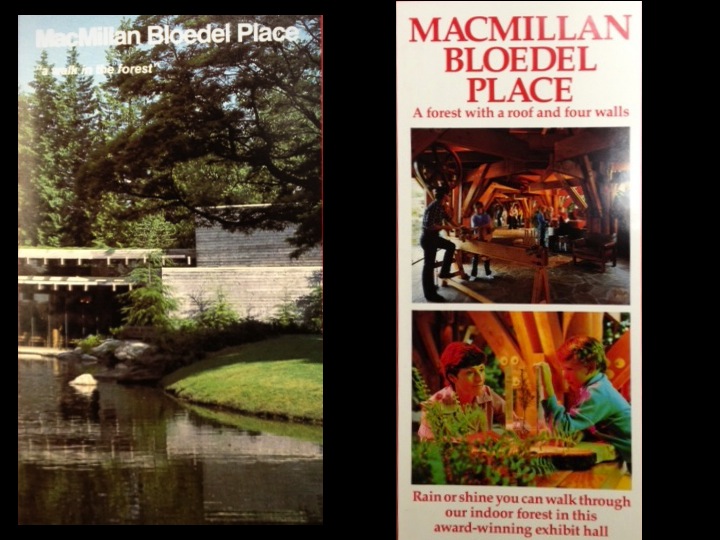 Brochures and newspaper articles from the early years.... 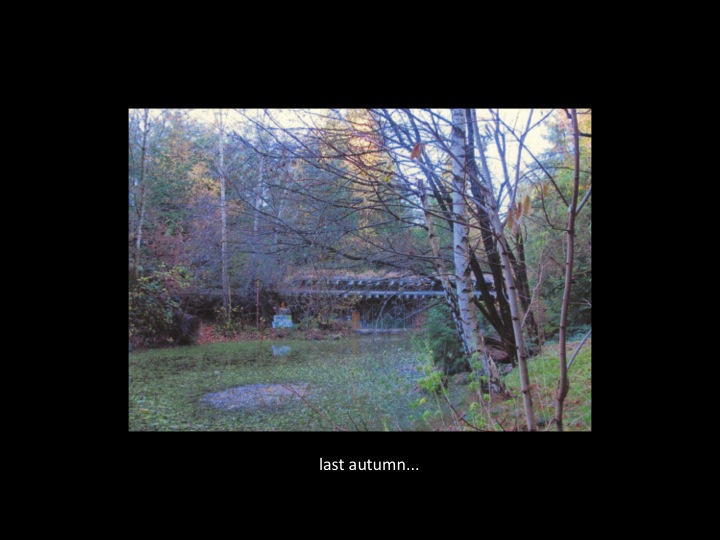 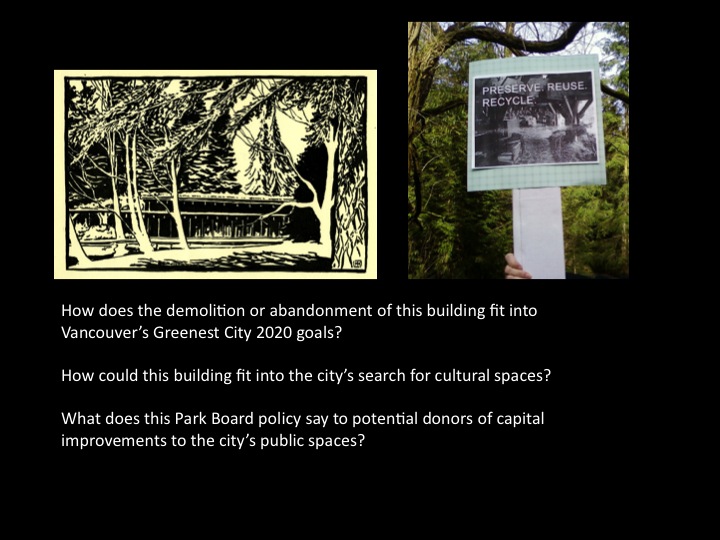 To wrap up, questions for the city and Park Board as it contemplates destroying the building. It seems especially bizarre, in the wake of the Waldorf Hotel closing, that the city would not consider repurposing this space for a cultural use if no direct VanDusen or forestry/environmental use can be found. And the final question, more philosophically, concerns the city's stewardships of donations from individuals: one generation's pride and joy is discarded by the next. Is this any way to build a mature city? Can you imagine New York or Chicago behaving like this?

Roy Forster, the first and, for 24 years, director of VanDusen: "it would be a disaster if the building were lost." How would they run the education program?

Henry Hawthorn, architect and former chair of the VanDusen Botanical Garden Association (VDBGA): Thompson Berwick Pratt, known as TBP, was the leading architectural firm in Vancouver in the 1950s/70s, an "incubator firm." Among its alumni are Barry Downs, Dick Archambault, Zoltan Kish, Erickson and Massey (briefly), and Paul Merrick, who is credited with the design of MacMillan-Bloedel Place. The firm had two design gurus: Ned Pratt and Ron Thom (design spirit of TBP for a number of years, who was Merrick's mentor). Thom was deeply influenced by Frank Lloyd Wright, his "polar star", and MacMillan-Bloedel Place is very much a Wrightian building, long horizontals anchored by the mass of the theatre at the end, very much Taliesen West, integrated with the site. One of the first organic buildings in Vancouver. It is a building that belonged in its place -- one of the major aspects of West Coast Modernism. The relationship of indoors and outdoor is a remarkable aspect of this building. The landscape is brought in through the glass into the interior; skylights bring in patterns of the leaves; even a simulated stream ran through the building, "anchoring nature."
All of this shows the California influence that came to Vancouver mainly through Richard Neutra (inspiration for getting the school of architecture here). Indoors and outdoors are unified by enormous sheets of plate glass. (Another Vancouver building, long since demolished, a Massey Medal winner in the early 1950s by Semmens Simpson, was the Marwell Building on Georgia/Alberni, which had a pond outside that flowed through into the interior.) The idea was to dissolve the difference between outside and inside.
You can also see the influence of Japanese architecture, expressing the heavy timber aspect of the Buddhist great temple buildings; Mac-Blo Place is flamboyant in its use of lumber, taking pieces of wood and joining them together to create its environment. An architecture of abundance, it reflects a time when we felt that the forests would never end.

Present circumstances: once MacMillan-Bloedel's commitment to the building ended in 1986, ten years after its opening, it was taken over by the VDBGA, which runs all the programs, recruits the volunteers; in recent years the building has been filled with these necessary people, and also makes room for the cherry blossom festival; Park Board has announced its intention to gut the building, maintain only the washrooms; the glass will be removed, leaving it as a shell, largely because they realize it would be expensive to demolish. A "scorched earth policy." The VDBGA is saying, we do not have space for the programs we are mandated to provide; the proposed volunteer office-admin space (the former library) in the old Floral Hall Building, is inadequate for what we have today, let alone the future; there is no place to put volunteer activities.

Rick Jeffery, Coast Forest Products Association, represents coastal businesses including the successor company to MacMillan-Bloedel. It is a trade association, and cares deeply about the building; "these buildings have become icons for us in the industry, showing us where we've been, where we've come." In the days of MB, we did think the forests were limitless,  but we've adapted to the need for sustainability. On behalf of the CFPA, Mr. Jeffery travels the world selling lumber from sustainable forests. Wood is a sustainable, durable, architecturally pleasing, low-carbon footprint way of building. It would be "a travesty to pull this building down." Wood has seismic properties, life-cycle efficiencies; China e.g. could offset some of their ghg footprint. That's the inducement to build 6-storey wood-framed buildings here, as so many of the ones being built in China are 6-storey walkups of concrete and steel and we have to demonstrate here what China could be doing with wood.

Comments from the floor:

•The city defaulted in not being able to construct the new building to house all the staff and programs. [The new Visitors Centre is considerably smaller than what was originally planned]

•SFU has a top notch environmental education program. Get the students who are on the way to Bamfield [Vancouver Island] to study marine biology and have them study botany in the Forest Centre.

•Cllr Adriane Carr, the "greenest building is the one that's left standing." The PB rule is not losing a square inch of public park space. Think about reasons why the rule doesn't apply here. Child care space and/or artists space would show cooperation between city and PB in the same way park buildings and field houses are used elsewhere in the city.

•I would like to see the building saved ... current use will probably have to endure because the space can't be spared for new uses. Take down the 12 x 12 log cabin in the heritage garden instead! [this was said in jest]

•Need a space for light testing for the $1.6 million-profit making light display. This is the only place on VanDusen where that can take place.

•Tony Dumoulin, chair of the 'committee to keep these buildings from being torn down.'  PB thinks it would be okay to shut down programs/work out of homes, in order to stop spending money on it. That strategy won't work and we will lose volunteers.

•Kids garden of 4 or 5 acres needed.... Longer term, the original purpose would be the best.... if sponsors can be found to honour that original idea that came from the forest industry itself; ecology-related, not industrial-related. One of the drawbacks is the lack of parking.


•The idea of making it a working ecology centre would work better than a kids' education place because kids don't learn the same way now, they're on the net etc. etc.
•I want my kids to get their hands dirty, to learn by doing, not by reading it on an iPad

•Must use social media to get to the politicians...
•Is there another building within the PB system that could be torn down instead??
•Come up with really strong, clear reasons to save it.
•East Van Love [sp?]is going to have a tweet-up about it.

•City has to get its hands on the issue because it affects the people. The VDBGA represents a very motivated group of people and the city should be listening. These people vote...

•It's about money... but the Park Board should realize It's impossible to raise that 845K per year [from the Christmas lights festival] without having the space for volunteers. If there's no space they won't come.

•If the building is to be gutted, then it defeats the argument about putting land back to park space.

•Save the building first, then look at long term.
•Save the cherry blossom festival. If this space goes, the festival will collapse because there's no space anywhere to administer it.

"In case I am unable to get into tonight’s session downtown I have come up with another idea for an alternate use of the Education Centre that is under discussion. I‘ve heard some rumblings that the Ryerson Church Hall at 45th and Yew will be bought and at least two pre-schools presently renting out that space will be displaced. The Van Dusen building may be a possible solution for those displaced children.  If the present Education Centre is preserved, I’m sure with public discussion involved, there could be viable use options found for the site. With the current mega building policy there will be many groups who will be in search of new home alternatives. There should be no hurry to tear down a building without looking at other opportunities for use. It simply isn’t in keeping with green policy."


Dear Park Board and City Councillors,


I became aware of this heritage issue over the past week and came up with an idea that the Parks Board may want to consider. Perhaps a review of alternative uses for this notable piece of architecture may include a study of converting this space into a Wedding Pavilion. Wedding venues with garden backdrops are obviously in high demand given the number of weddings groups booked in advance yearly. Both Queen Elizabeth Park and Stanley Park have such venues in place to host these occasions. Even without a formal Pavilion presently, I am sure Van Dusen hosts many wedding groups yearly for just garden photo backdrops. It may make good economic sense to preserve the existing Education Centre and through conversion turn it into a lucrative income stream for the Park. With a little imagination and a strong sense of preservation, many happy memories can be created and one less building bull-dozed.

Thanking you in advance for your consideration.

Patricia Luk
Posted by A Walk in the Forest at 10:06 AM